You are here: Home / News / volunteer

Hunts Forum of Voluntary Organisations hosted its annual Volunteer Awards on Wednesday 20 November at Huntingdon Town Hall. The event marked 25 years since Hunts Forum began supporting voluntary and community organisations across Huntingdonshire, and it was a chance to celebrate some of the amazing people who give up their time to support and strengthen our communities. 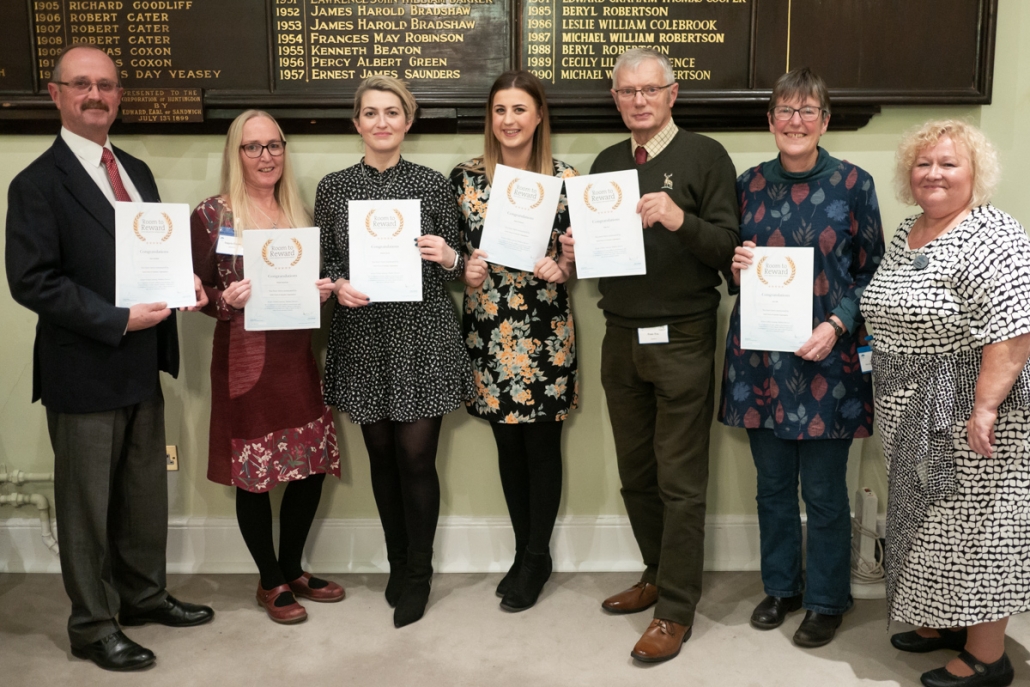 The first award went to Peter Fox, who heads up the Car Share team at CARESCO. Peter did a huge amount of work to secure a minibus for the charity, greatly expanding its capacity to offer lifts to those who need it. Katy Campbell dedicates time every week to the Cornerstone Care in Confidence, running its social media, helping in the boutique and fundraising. Her willing attitude and sunny disposition are recognised and appreciated by everyone who works with her. Niamh Robinson volunteers at St Ives Young Carers group, a safe space for children aged five to 16 who care for a parent or sibling. She has built and maintained strong relationships with the children in the group, earning their trust and building their confidence. 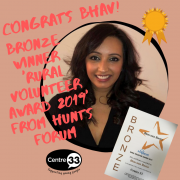 The David Morgan Rural Volunteer Awards are specifically for volunteers whose roles take them into our rural communities. Bhavana Bhakta is a long-serving and ceaselessly dedicated volunteer at Centre 33’s Young Carers Project. Shiellah Mushunje was recognised for her voluntary work with HIV and sexual health charity Dhiverse, providing a wide range of support and playing a key role in working with BAME communities to challenge stigma around HIV. Meanwhile, Jane Sills was awarded for her voluntary work on a wide range of projects in Ramsey. She has played an instrumental role in Ramsey Million project, during which time she has overseen the creation of two youth clubs, a music festival and a walled kitchen garden, among many other projects.

Each of the winners received night’s stay in a hotel, courtesy of Room to Reward – many thanks to them for supplying the prizes.

Our CEO Julie Farrow with people from the organisations that have been Hunts Forum members throughout our 25-year history.

Hunts Forum also took the opportunity to celebrate the organisations that have been with them as members throughout their 25-year history: Alzheimer’s Society, CARESCO, Huntingdonshire Society for the Blind, Caring Together, CPSL Mind, CRUSE Bereavement Care, Age UK Cambridgeshire & Peterborough, Multiple Sclerosis Society and Disability Huntingdonshire. These organisations have made an enormous contribution to the health and wellbeing of Huntingdonshire residents. The team at Hunts Forum look forward to working with them – and all 111 member organisations – for another 25 years.